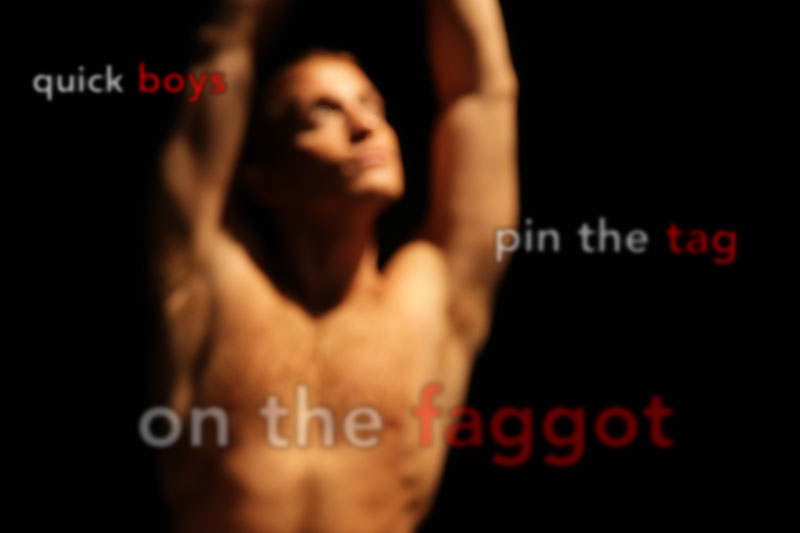 DESCRIPTION
Political video art piece based on American poet Ed Madden’s poem PRICK that uses Saint Sebastian’s image to explore the Conservatives’ bigoted attacks on the LGBT community, not only in the US, but also in countries like Colombia, Russia and Uganda. The word prick acquires a deeper definition especially when teenagers commit suicide after nasty words are being thrown at them like arrows. But like Sebastian, who actually survived his ordeal, things will get better when we expose and deal with these pricks for what they are: bigots.  Saint Sebastian, tied to an imaginary tree with imaginary ropes, is willingly attacked by words describing what a Prick is in today’s culture: a double moral person obsessed with what Gay men do with their private parts, forgetting about who they are or who they love. The camera explores the Saint’s body as the animated words from Ed Madden’s poem attack it like arrows missing their mark. The private parts of his gorgeous body are never exposed, and the full body is only revealed at the end of a textual attack symbolizing the bullying that most of us endure quietly every day of our lives.

Santiago Echeverry is a Colombian-American New Media Artist and Professor, with a background in Video Art, Web Design, and Performance Art. He started his artistic career in 1989, participating since then in some of the most important festivals in the world, and he is considered a pioneer in the field of Net Art and Queer Filmmaking in Latin America. In 1992, he graduated top of the inaugural class of the Universidad Nacional de Colombia’s Film and Television School. In 1995, he was awarded the prestigious Fulbright Grant to earn his Master’s degree from the Interactive Telecommunications Program at NYU. He started his academic career in 1993, and is currently an Associate Professor and co-founder of the recently created Film, Animation and New Media Department at the University of Tampa. His research is focused on volumetric imaging, interactive web development, and creative coding. All his works and projects are available online at www.santi.tv